The life and times of Liakounakos… from rags to riches and crime rackets! (pics) 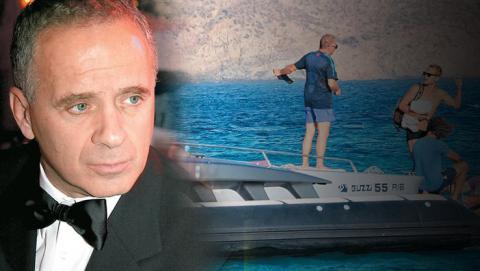 On Monday night, Thomas Liakounakos, aged 67, and a retired former high-ranking military officer were taken into custody. The high-profile businessman was apprehended from his home in upmarket Psychiko after an arrest warrant was issued in relation to charges stemming from a case involving a contract with Swedish multi-national Ericsson.

He faces felony charges of bribery as well as money laundering, standing accused of managing as much as 1.6 million euros in bribes and kickbacks from as early as 2000.

Piraeus born Liakounakis is a self-made millionaire who founded, owns and heads a group of companies ranging from publications to medical centers to softwre development and construction companies. He started young selling supplies to ships in Piraeus with activities allegedly continuing even while he served as a seaman with the Greek Navy.

His marriage to Maria Sotiriadou, with whom he had three daughters and a son, put him in cahoots with the well-to-do as the Sotiriadou family was connected to distinguished New-Democracy politician Evangelos Averoff.

Liakounakos’ daughter, Avra, married Steve Romanos in a luxury affair at Lagonisi, along the Athens Riviera

The breakthrough deal for Liakounakos came with the purchase of the first Leopard tanks for the Greek Army with ripples of the first scandal unable to stop the avalanche of more deals that followed.

Axon Holdings was involved in various ventures and branched out to become a consortium with Axon Construction, Axon Stockbrokers, financial newspaper Kerdos, Axon Airlines and SONAK for defense electronics).

Wife 2 – Natasha! It was a whirlwind romance that blew his mind away…

After his divorce to Sotiriadou, he married Natasha Katsarou and was featured regularly in the tabloids. The couple owned a villa on Mykonos, a chalet in Arachova and billions of euros worth of assets ranging from speedboats to expwensive cars.

An idyllic life of parties and Porsches but now its time to pay the price with prison!

Godfather to former New Democracy leader Miltiadis Evert’s daughter, Alexia, he continued building connections and wealth. Surprisingly, the most money he amassed was during socialist PASOK Prime Minister Costas Simitis’ leadership with almost 6 billion euros in defense contracts. Oftentimes, he would get paid but deliver nothing, such as the listening devices that SONAK never delivered.

Apart from defense, he also founded the Euromedica Group with 18 clinics, 86 health units, 58 diagnostic centers and 9 rehab centers. The group ran aground as public health funds dried up. The Euromedica subsidiary alone has debts to banks that exceed 372,700,000 euros!