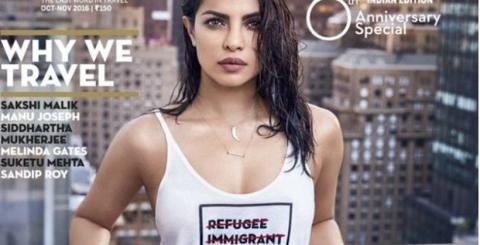 Sexy “Bollywood” star Priyanka Chopra has apologised, after posing in a t-shirt on the cover of the October edition of travel magazine “Conde Nast Traveller India” with the words “REFUGEE”, “IMMIGRANT” and “OUTSIDER” crossed out in red-leaving only the word “TRAVELLER”. The cover sparked a great backlash, with Twitter users accusing the 34-year-old former Miss World, of disparaging the plight of the refugees and migrants who fled their war-torn countries to save their families’ and their lives. “They [Condé Nast] specially got this [T-shirt] made and implored me to wear it. They said they were addressing xenophobia which is a big issue that is happening,” Chopra told NDTV in an interview.
“So their idea was that. And I bought into it, I guess. And I am really, really apologetic about the fact that sentiments were hurt … The point the magazine wanted to make was actually something good.” Other Twitter users took to Photoshop, changing the struck-out words on the Chopra’s T-shirt to “COMPASSION“, “EMPATHETIC” and “INCLUSIVE” – leaving only the word “OFFENSIVE”. “At Condé Nast Traveller, we believe that the opening up of borders and the breaking down of walls can help us discover the world, and open up our minds and hearts,’ said the magazine.