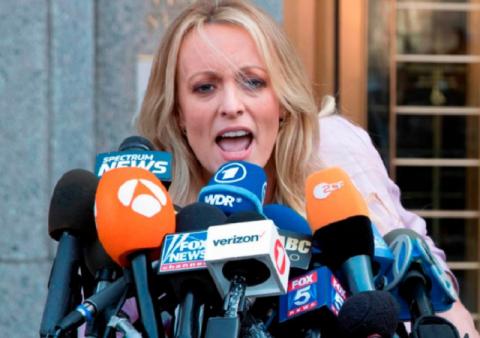 Daniels already was suing Trump seeking to void a nondisclosure agreement she signed that barred her from talking about what she said was an affair with the president in 2006.

The White House, which did not immediately comment on her new lawsuit, denies such an affair happened.

In his April 18 tweet, Trump scoffed at a police sketch artist drawing that Daniels recently had made of a man she said threatened her in 2011 over her alleged affair with Trump.

The man, Daniels says, approached her while she was with her baby daughter in Las Vegas, several weeks after she agreed to cooperate with a story that In Touch magazine was preparing about the purported tryst.

That In Touch story never ran, reportedly because a lawyer for Trump threatened to sue the magazine at the time.

Daniels has said the man in Las Vegas who walked up to her said: "Leave Trump alone. Forget the story."

The man then leaned down, looked at Daniels' child and said, "That's a beautiful little girl. It'd be a shame if anything happened to her mom," according to Daniels.

Michael Avenatti, Daniels' lawyer, during an April 17 appearance with her on ABC's "The View," unveiled a drawing of the man that was prepared with a renowned sketch artist.

Avenatti also announced a $100,000 reward for the identification of the man.

A day later, Trump, who had pointedly not tweeted about Daniels or her claims of an affair in the past, referred to the sketch as a "con job" in what apparently was his first public comment about her allegations.