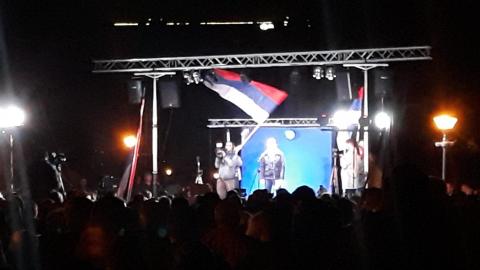 Several thousand people gathered in Banja Luka, the administrative centre of Bosnia's Serb-dominated entity, Republika Srpska, RS, on Thursday night for two rival rallies, one a protest against the RS authorities and the other a counter-protest in support of RS institutions.

Both took place at the same time, 6pm on Thursday, and in the same park in the northwestern Bosnian city, only a few dozen meters away from each other and separated by large police forces.

The opposition protest follows an incident at the last session of the RS parliament when the Minister of Police, Dragan Lukac, slapped an opposition MP, Drasko Stanivkovic, during a heated debate on a sealed document "The Reform Program", concerning Bosnia's future relations with NATO.

The opposition is demanding the immediate dismissal of Minister Lukac, but also responsibility for those who, according to them, submitted a forged document to parliament.

On Thursday, ahead of the rally, Stanivkovic filed a criminal complaint against Lukac, who said he had no intention of resigning.

The opposition accused Bosnian Serb leader Milorad Dodik of delivering only part of the NATO document to lawmakers, so hiding the fact that Bosnia is allegedly moving toward NATO membership - which Dodik has always pledged to prevent and most Bosnian Serbs oppose.

"The document received by the deputies of the National Assembly of Republika Srpska has not been signed, it has not been certified by anyone, and the document that appeared in English was signed by three members of the Presidency, and these two documents are diametrically opposite in key aspects," Jelena Trivic, an opposition MP from the Party of the Democratic Progress, said before the rally.

The counter-rally, which has the...