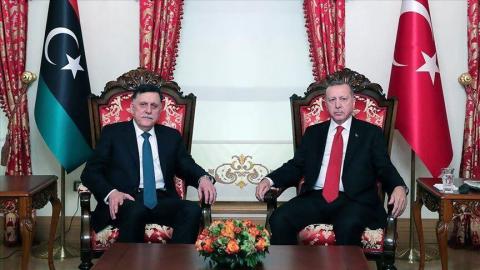 A deal between Turkey and Libya guarantees that its maritime freedom of movement is not "undermined", country's communications director said on Dec. 27.

"Our maritime agreement with Libya ensures that Turkey's freedom of movement in the high seas is not undermined," Fahrettin Altun said, adding that the agreement also ensures a strong relationship with the Libyan government.

"We are committed to stability and peace both in Libya and in the Mediterranean," he added.

"As President [Recep Tayyip] Erdoğan said, we will of course honor our agreement. We are fully committed to protecting our mutual interests and establishing stability in the Mediterranean."

Altun stressed that Turkey is supporting the "internationally recognized legitimate government in Libya" and foreign powers must stop supporting illegitimate groups against the Libyan government.

"As we support the Libyan government, we do not want Libya to be a war zone. Those regional forces working to reestablish repressive regimes unaccountable to people are active in Libya," Altun said, and added: "Their efforts to install client governments will not succeed."

On Nov. 27, Ankara and Tripoli's GNA signed two separate agreements, one on military cooperation and the other on maritime boundaries of countries in the Eastern Mediterranean.

Following the military cooperation deal, Erdoğan said Turkey might consider sending troops to Libya if the GNA made such a request.

On Dec. 26, Erdoğan said a motion for military support to Libya will be submitted to the Turkish parliament on Jan. 8 or 9 as Turkey was "invited" by Libya.