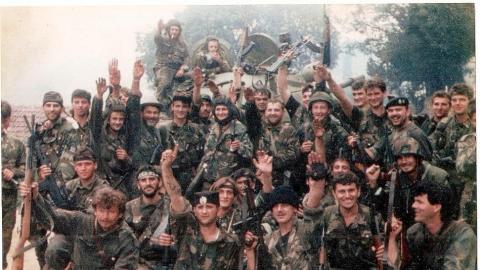 'Defenders of the homeland'

On the eve of Croatia's first multi-party elections in April 1990, a young anti-communist activist called Dobroslav Paraga brought together a core of people who re-established the Croatian Party of Rights, which was previously a nationalist liberal party that was banned by Yugoslav king Aleksandar Karadjordjevic in 1929. Paraga became its president, and Ante Paradzik, another anti-communist dissident, became its vice-president.

The HOS functioned as the party's military wing, with Paraga as its supreme commander and Paradzik as general chief of staff.

As a result of a deal between Paraga and Slovenian Defence Minister Janez Jansa  (who is now Slovenia's prime minister), the first 80 HOS members were armed and trained by the Slovenian MORiS military unit at a training facility in Kocevska Reka, near the border with Croatia.

Like the Croatian Party of Rights, the HOS cherished Ustasa symbols. The acronym HOS was...