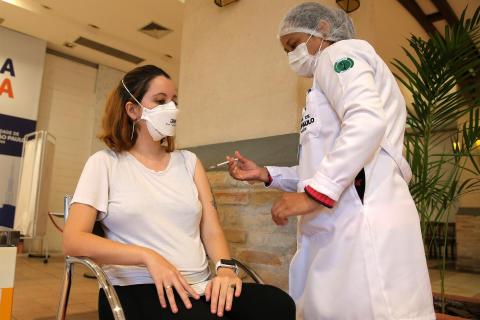 Already reeling from one of the highest death tolls in the pandemic, Brazil is bracing for the threat of a third wave of COVID-19, fueled by vaccination delays and a lack of containment measures.

The curve has since turned down, with an average of around 1,600 deaths per day over the past week, and Brazilians have largely gone back to business as usual.

But with the southern hemisphere winter approaching again, experts say warning lights are flashing, raising fears of a return to overflowing hospitals, mass graves, refrigerator trucks piled with corpses and other gruesome scenes from the darkest days of the pandemic in Brazil.

The sprawling country has been slow to vaccinate its 212 million people, and hasty in lifting state and local stay-at-home measures, epidemiologists say.

COVID-19 has already claimed more than 470,000 lives in Brazil, second only to the United States.

The South American country's per capita death toll - more than 220 per 100,000 inhabitants - is one of the world's highest.

But many Brazilians seem unconcerned by the threat of a new surge - not least far-right President Jair Bolsonaro, who continues to regularly defy expert advice on containing the virus.

"Brazil has taken an unprecedented health catastrophe and turned it into something normal. The majority of people...

Thomas Piketty: “Neoliberalism is dead since 2008”