US and EU Will Create Council on Russian Policies 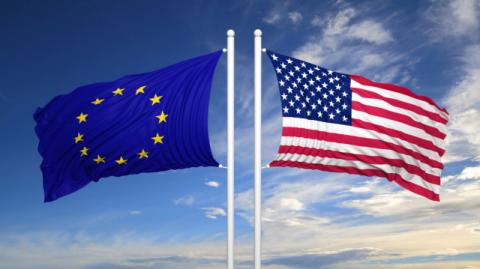 Participants fo the EU-US summit to be held in Brussels on June 15, will announce the creation of a trans-Atlantic "structured dialogue" in order to coordinate Washington and Brussels' policies with regard to Russia, a diplomatic source told TASS.

The EU external action service refused to give any official comment about the information.

"During the EU-US summit a decision will be announced to create a structured dialogue to coordinate policies with regard to Russia," the diplomatic source said. "This council would allow holding regular consultations aimed at bringing closer Russia-related approaches on both sides of the Atlantic. Both parties aim to continue dialogue with Russia on certain issues of mutual interest."

Among the issues of mutual interest for Russia and the West, the source noted climate change, Iran's nuclear program and Middle East peace process.

The source went on to say that Brussels and Washington are set to "coordinate their response to Russia's destructive actions," mentioning some of the West's ungrounded accusations against Russia. This includes "interference into Western democratic processes, disinformation, cyberattacks."

He did not comment on how this structure would work in practice, at what level and how often those consultations will be held, saying that all those matters will be agreed upon after the summit./tass