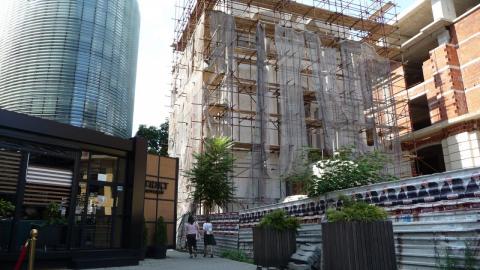 The mayor of Skopje's municipality of Centar, Sasa Bogdanovic, said on Monday that a large unfinished memorial complex dedicated to Skopje-born Mother Teresa should not be completed but erased from the city's urban plan because it blocks an important pedestrian street leading to the main square.

Bogdanovic was responding after his administration received a memo from North Macedonia's Foreign Ministry conveying the Vatican's recently-expressed wish for the memorial to be finished.

"We think that this memorial should not be [built] in that place, not because we have anything against its significance or against the legacy [of Mother Teresa] but on the contrary, because it is placed in the middle of a street," Bogdanovic told media.

According to the Foreign Ministry's memo, sent to the municipality in which the memorial is being built, as well as to the City of Skopje and the Culture Ministry, the issue was raised during a visit by North Macedonia's President Stevo Pendarovski to the Vatican in May.

"During the visit… the Vatican raised the issue of the status of the Mother Teresa memorial in Skopje, as well as the construction of a sanctuary in her memory," the memo reads, adding that the Vatican has expressed the wish to see the project finished.

The Culture Ministry, which is formally in charge of the memorial, has confirmed receiving the memo and has said that it is still working on its official reply. The City of Skopje said it has not yet seen the memo.

The unfinished memorial has long been a point of contention in North Macedonia.

Forming part of the former authoritarian government's grand revamp of the capital, dubbed 'Skopje 2014', it was initially announced in 2013 as a donation from the Indian Tycoon Subrata...