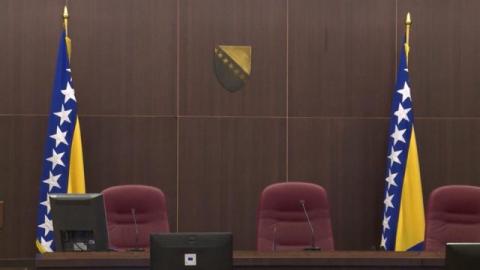 Six Bosnian Serb ex-servicemen - Ilija Krcmar, Bosko Uncanin, Svetislav Racic, Zeljko Bajic and two others who both have the name Nikola Cuk - failed to appear at the Bosnian state court on Tuesday for the opening of their trial for crimes against humanity.

Two more defendants, Marinko Miljevic and Dragan Despot, did appear in court, and both pleaded not guilty.

The defendants are accused of participating, together with others, in the shooting of at least 78 Bosniak civilians in the municipality of Kljuc.

The indictment alleges that on June 1, 1992, they forced the civilians who were detained in a school in the village of Velagici out of the building, lined them up and opened fire at them, "killing at least 78 victims, whose bodies were transported by trucks and buried in a mass grave".

All the suspects were members of the Military Police Platoon of the Second Engineering Regiment of the Bosnian Serb Army's Second Krajina Corps, according to the indictment.

Five of the defendants who failed to appear in court on Tuesday - Krcmar, Racic, Bajic and the two men named Cuk - are citizens of Serbia and are believed be living there.

The lawyer for the sixth defendant who failed to appear, Uncanin, said his client did not attend the hearing because he did not have enough money to buy a ticket to get there.

Defendant Miljevic was previously sentenced to eight years in prison for a killing in Kljuc in August 1992.