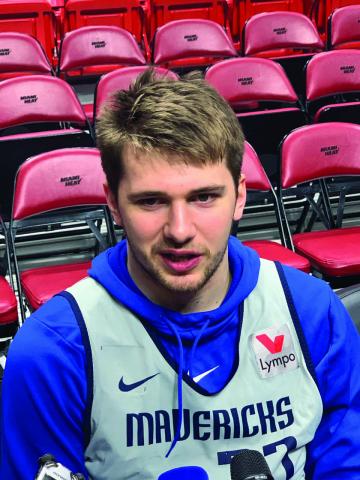 Ljubljana – Young Slovenian basketball ace Luka Dončić has been honoured by the Slovenian tourism community with the Crystal Triglav, awarded to those who contribute the most to Slovenia’s promotion around the world. Mark Cuban, the owner of Dončić’s NBA team Dallas Mavericks, became the ambassador of Slovenian tourism for 2021.

Dončić earned the Crystal Triglav for the Tourism Personality of the Year by making a key contribution to raising the global profile of Slovenia as a country of great athletes.

“Despite living abroad since a very young age, Luka has not forgotten where his remarkable sporting career began, and his skills and talents have contributed significantly to Slovenia’s recent historic basketball achievements,” said the award jury.

“Wherever Luka competes and wins, he never forgets to mention that he comes from Slovenia. This contributes to the world’s interest in this country of outstanding and courageous top athletes,” they added.

Cuban visited Slovenia in August this year, when Dončić signed the biggest contract in NBA history with the Dallas Mavericks. He was reportedly impressed by Ljubljana and mentioned that he was open to business opportunities in Slovenia.

The tourism ambassadors and the Crystal Triglav award recipients are chosen by key tourism stakeholders along with the Ministry of Economic Development and Technology.

The winners are declared at the annual Days of Slovenian Tourism, with this year’s award ceremony scheduled to take place in the Postojna Cave on Wednesday.