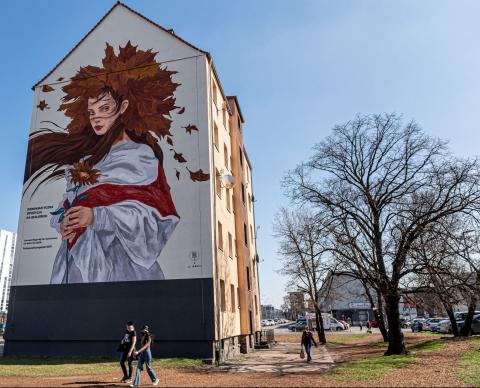 "But the circle was closing in on me and my friends," Belkevich tells BIRN. "The KGB started coming to our houses to checkup on us. Then one day, I got a notification from the police telling me to show up at the station for interrogation that Friday. That's the moment I realised it was time to go."

At first, Belkevich moved from location to location inside Belarus. Eventually, though, it did not feel safe anywhere in the country so, together with a group of friends, he left for Lviv in Ukraine.

In October 2020, he and his friends applied for humanitarian visas at the Polish consulate in Lviv, which enabled them to live in Poland for up to a year. Upon arriving in Warsaw, Belkevich applied for asylum in Poland, which he was recently granted. In the meantime, he has been working for Sluszna Strawa, a collective for immigrants living in Warsaw, cooking and selling food for non-profit purposes.

Data from Poland's Labour Ministry showed that at the end of 2019 there were 105,404 Belarusians like Vladimir living in Poland out of a total of roughly 2 million foreigners. This number is estimated to have swelled to around 150,000 in the year since the latest wave of repression began in Belarus.

According to Ales Zarembiuk, head of Belarusian House in Warsaw, a foundation which functions as a hub for the Belarusian opposition in exile in Poland and is financially supported by the Polish government, more Belarusians are arriving now than even during the spring. This is because unlike earlier this year, any remaining hope that the Belarusian dictator will fall from power has all but disappeared.

The crackdown on dissenters by the Lukashenko regime has never really let up since the mass protests...