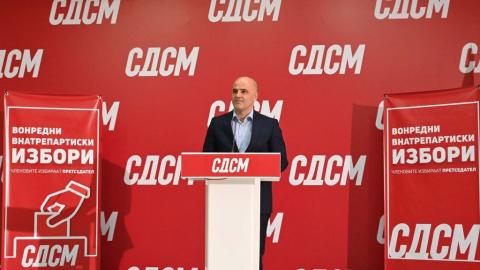 Dimitar Kovacevski, who is the current deputy Finance Minister in Zoran Zaev's government, won more than 37,000 of just over 44,000 votes in internal Social Democratic Party leadership elections on Sunday, leaving the other two candidates, Frosina Remenski and Jovan Despotovski, far behind.

"Everything that will happen within the party but also in the country in the years to come will be our responsibility. Whenever the Social Democrats are strong and have a clear agenda, the country moves forward, so we need a strong and unified party. We are the pillar of the progressive part of our society, so people rightfully expect us to work together, responsibly and with dedication," Kovacevski said on Sunday after being elected leader.

Kovacevski, 47, who was Zaev's favourite in the race to be his successor, comes to the party's helm at a tough time, as the country faces health and energy crises, and as it is struggling to achieve a breakthrough with neighbouring Bulgaria that would finally unclog its EU accession process.

The Social Democrats, SDSM, in power since mid-2017, have elected a new leader after sufferig major defeats in November's local elections, prompting Zaev to announce his resignation both as PM and as party chief.

This caused instability in the fragile ruling majority, which nevertheless survived an opposition push to hold a no-confidence vote. Last week, the government, still led by Zaev, also boosted its majority after gaining the support of four more MPs. It now has the support of 64 MPs in the 120-seat parliament.

After replacing Zaev as head of the party, Kovacevski is likely to replace him as head of the government. Last week, Zaev told the media that his days as PM were "numbered" and that he would prefer a new...