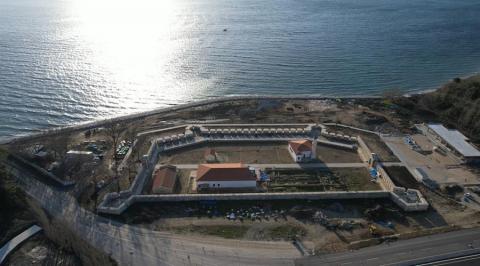 The restoration of a 202-year-old castle, which was used as a combat center and weapon repair workshop during the Dardanelles Wars, is about to end, following six years of efforts.

Bigalı Castle, located on the European coast of Turkey's northwestern province of Çanakkale and completed during the reign of Ottoman Sultan Mahmud II, will soon begin to welcome visitors once again.

The historical building had changed the fate of the Gallipoli Campaign of the Allied Forces, consisting of British and French naval units, aiming to capture Istanbul and bring aid to Tsarist Russia during the First World War.

Speaking to Demirören News Agency, İsmail Kaşdemir, the head of Gallipoli Historic Site for the First World War, said that with the reopening of the castle, the visitors will feel the "spirit of Çanakkale" and have a journey through history.

Within the scope of the efforts, the walls of the destroyed castle were restored in accordance with their original form, and a gun repair workshop and a mosque were rebuilt.

The coastal part of the castle was nourished with sediments for visitors to walk around, and the entire restoration cost nearly 18 million Turkish Liras ($1.3 million).

The rifles and various materials used during the war are expected to be repaired soon to be exhibited.

"We will explain to the visitors how the weapons were repaired here, which machines were used [during the battles] and how they were made," Kaşdemir said.

He also noted that Tüfekçi [Rifleman] Yusuf, an Ottoman hero who served in Bigalı Castle during the Çanakkale Wars, will be introduced to visitors.

"Tüfekçi Yusuf is very important for the people of Gaziantep and has a symbolic value and a significant role in the glorious defense...