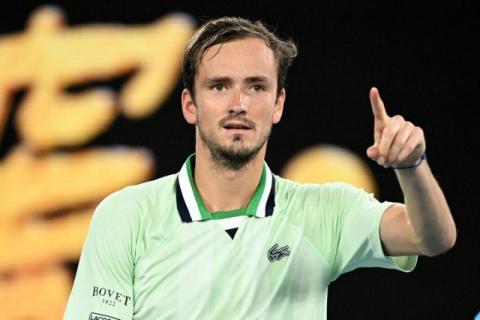 Medvedev defeated Stefanos Tsitsipas and scheduled a clash with Rafael Nadal.
Medvedev had an outburst of rage between the second and third sets, when he attacked the umpire for not warning Stefanos' father about coaching.
"Such emotions didn't help me. I lost the match many times because of this. As soon as I did that I thought it was a big mistake. Luckily I regained my concentration. Good serves brought me back into the match. I regained my focus. I'm happy that everything worked out fine", Medvedev said, adding:
"Some matches were tied. We both had chances. At 5: 4 in the third set I found my game, I started reading the game. His energy dropped because of it, mine went up."
Medvedev played five sets in the quarterfinals and almost five hours against Felix Auger-Aliassime.
"When I went out from the match with Felix, I talked to my coach and I was like, 'How do I do in two days?' Like in this moment I was so dead," Medvedev said in his on-court interview.
"I sat down in the locker room after the match and I barely could move. And I tried to do the recovery well and the next day I woke up and the moment I opened my eyes it was like, 'it's not too bad'. I felt some pain here and there, I can recover, and that's what happened."
Medvedev noted that in facing Nadal, he plays a second member of the Big Three attempting to win major No. 21 for the all-time men's lead after denying Djokovic that chance in September's US Open finale.
"I will play again with someone who is chasing the 21st title. Last time Rafa watched it on TV, I don't know who he was cheering. In two days Novak will watch (laughs)."
He was then asked in the "Eurosport" studio if he would think about Novak on Sunday. "I will not think about him before...