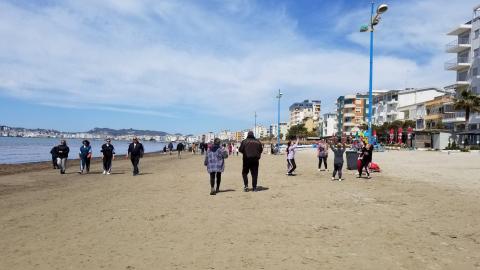 The Albania Institute of Statistics, INSTAT told BIRN that the number of Serbian citizens who entered Albania in 2021 doubled in comparison to 2020.

Albania's Minister of Tourism and Environment, Mirela Kumbaro, claimed that the increase was the result of the Open Balkan cross-border political initiative between Albania, North Macedonia and Serbia, which started in 2019 as the so-called 'mini Schengen' scheme.

"In 2021, compared to 2019, we had a 110 per cent increase in tourists from Serbia," Kumbaro told Radio Free Europe during a visit to Serbia last week.

She claimed that the increase in Serbian visitors to Albania is an important step towards "emancipation" from previous ways of thinking. Serbia and Albania have had a longstanding enmity.

"Serbia was blocked from moving to its traditional market,...