A court in Mesolongi, western Greece, on Friday cleared Golden Dawn deputy Constantinos Barbarousis and another 10 suspects of any involvement in a raid on an open-air market in the town in September 2012 during which migrants stalls were smashed.

German prosecutors on Thursday searched the Munich offices of Krauss-Maffei Wegmann (KMW) in connection to the alleged payment of bribes to Greek officials over the sale of 170 Leopard 2 tanks and 24 self-propelled howitzers at least a decade ago, Kathimerini understands.

A Chechen man wanted in Russia for the alleged murder of five policemen should be extradited from Greece, a court in the northern Aegean ruled on Friday. Amaev Khavazi, 34, was arrested on September 5 while trying to enter Greece illegally. Authorities only realized his identity after taking his fingerprints. 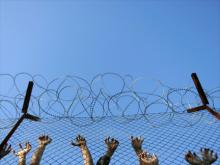 Kikilias made his comments while visiting a former army camp in Corinth, west of Athens, that has been turned into a center for holding irregular migrants.

He said that so far some 450 migrants who had been held at the center have been repatriated.

An investigation has been launched after a 4-month-old baby died on board a tourist coach in northern Greece early on Friday.

The coach was traveling from Romania to Thessaloniki when the childs parents, a Romanian couple, asked the driver to call an ambulance after their child started to run a high temperature.

BELGRADE - Members of 17 special police units from 12 South-East European countries staged a hostage rescue demonstration exercise within the international seminar on the fight against terrorism in 2014in Batajnica on the outskirts of Belgrade on Friday.

Prime Minister Antonis Samaras hailed statistical data released on Friday showing that Greece has exited a six-year recession, claiming that his government's pledges of growth had been realized and declaring that "Greece is back."

A court in Mesolongi, western Greece, on Friday cleared Golden Dawn deputy Constantinos Barbarousis of any involvement in an incident at an open-air market in the town in September 2012 when migrants stalls were smashed.

Greece's economy emerged from a prolonged austerity-led recession as early as the first quarter this year and expanded in the next two quarters as well, data showed on Friday.

This is the first time published data has shown Greece emerging from the crippling recession it sank into when its debt crisis exploded, forcing the country to seek aid from foreign lenders.

Romania has posted the highest Q3, 2014 economic growth in the European Union, on a quarterly basis, according to preliminary estimates released on Friday by the Eurostat European Statistics Office.

Following a new deadlock in talks between diplomats from Greece and the Former Yugoslav Republic of Macedonia (FYROM) over the Balkan state's official name, Washington has said it supports the continuation of United Nations-mediated efforts to resolve the longstanding dispute.

Despite the daily crises and the coalition governments many own goals we should not lose sight of the bigger picture.

It appeared that Greece had finally entered more stable territory and the economy had started to grow. However, as has so often been the case in the past, the political system dropped the ball at the worst possible moment.

A new study points to an increase in child obesity during the years of Greeces economic crisis, reversing an apparent stabilization of the phenomenon in the years prior to that.

A 14-year-old boy was to face a prosecutor in Halkidiki, northern Greece, on Thursday on charges of desecrating a national symbol after he allegedly removed the Greek flag from the yard of his former school in Nea Moudania and hid it in nearby shrubs.

According to a police investigation, the pupil, who is not Greek, removed the flag from its mast on the night of October 19.