Serbian parl't on participation in UN missions on Thursday 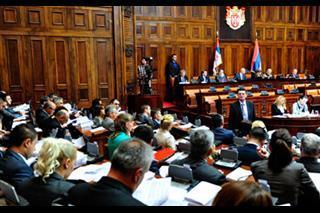 BELGRADE - Serbian parliament resumes the second extraordinary session on Thursday with a debate on deployment of Serbian Armed Forces (SAF) and the police to United Nations and European Union peacekeeping missions and operations.

With parliament's approval, the SAF could this year be engaged in seven new international UN peacekeeping operations and the EU military training mission to Mali.

The plan for this year envisages involvement of up to 300 SAF troops and 18 members of the police in multinational UN and EU operations.

At the moment, Serbian army participates in six UN-mandated missions and two missions under the EU flag, while additional troops could be deployed to peacekeeping missions in Western Sahara, Mali, Kashmir, South Sudan and Sudan.

An eight-member air medical evacuation team is engaged in the peacekeeping operation in the Democratic Republic of Congo (MONUSCO), four military observers have been sent to Liberia (UNMIL), and three to Cote d'Ivoire (UNOCI), 46 troops are stationed in Cyprus (UNFICYP), 143 soldiers and officers are in Lebanon (UNIFIL), while one military observer is sent to the Golan Heights with the UN Truce Supervision Organization in the Middle East (UNTSO).

Members of the police are engaged in four UN and EU peacekeeping operations.

Serbian participation in international UN and EU missions will cost a little over RSD 1.183 billion in 2014, including approx. RSD 265 million to be paid from UN funds.