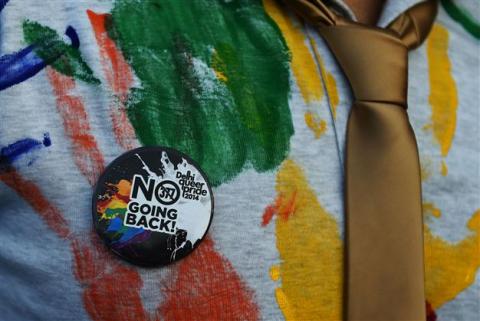 United Nations chief Ban Ki-moon has accused India of fomenting intolerance with its ban on gay sex amid uproar over a ruling party minister's plans to make homosexuals "normal."

Speaking on a visit to the capital New Delhi, Ban said he "staunchly opposed the criminalisation of homosexuality" referring to India's colonial-era law that prohibits gay sex.

"I am proud to stand for the equality of all people - including those who are lesbian, gay, bisexual and transgender," the U.N. secretary general said in a statement late Jan. 12.

"I speak out because laws criminalising consensual, adult same-sex relationships violate basic rights to privacy and to freedom from discrimination. Even if they are not enforced, these laws breed intolerance."

India's Supreme Court reimposed a ban on gay sex in late 2013, ruling that the responsibility for changing the 1861 law rested with lawmakers and not judges.

Gay sex had been effectively legalised in 2009 when the Delhi High Court ruled that banning "carnal intercourse against the order of nature" was a violation of fundamental rights.

Ban's comments came on the same day that a state minister from Indian Prime Minister Narendra Modi's ruling party announced his plans to make gays "normal" in the coastal resort state of Goa.

Ramesh Tawadkar, sports and youth affairs minister in Goa's state government, told reporters that he planned to open up centres on the lines of Alcoholics Anonymous to treat them.

"We will make them normal. We will have centres for them, like Alcoholic Anonymous centres," Tawadkar said, adding that the state would "train them and give them medicines too."

Tawadkar, a member of Modi's Bharatiya Janata Party (BJP), made the...