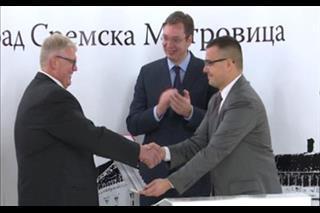 The new owner has bound itself to invest EUR 16 million in new equipment and hire 360 workers in the first stage, with production expected to start in early July.

Gerlinger Holding's long-term goal is to invest EUR 20 million in the factory, hire more than 1,000 workers and export its products to China and Russia.

At the ceremony, Vucic noted that the arrival of Gerlinger Holding is very significant for Sremska Mitrovica, the Vojvodina province and Serbia because the Mitros factory - which was the pride of the country for decades, only to be destroyed in the period from 2005 to 2009 - will be renewed on a healthy foundation.

Vucic said that he believes that Gerlinger Holding will cooperate with Germany's Toennies, whose representatives are already looking for land in Serbia to build pig farms on, which he said would give another boost to production at Mitros.

This will also help Serbian farmers, because they will produce more and secure a market for themselves, the prime minister said.

Gerlinger Holding owner Johann Gerlinger said that Serbia is the ideal place for investments because it has raw materials, but also meets the other required preconditions.

He said that his company has production plants in Romania and Hungary and that it exports products to the EU and Russia.

I knew that, if we want to build special ties with Russia, we have to go to Serbia, Gerlinger said.

He pledged that his company will introduce European production standards and help Mitros regain the...