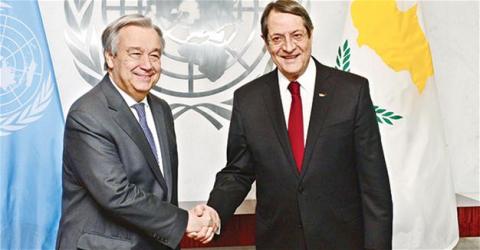 Greek Cypriot President Nicos Anastasiades said he and United Nations Secretary-General Antonio Guterres share the view that progress in efforts to reunify the island is unlikely before next month's referendum in Turkey.

Anastasiades said after talks with Guterres on March 22 in New York that peace negotiations, which were stalled amid a dispute over the Greek Cypriot parliament's decision to commemorate the 1950 "Enosis" referendum that called for the merging of the island with Greece, could resume soon, the Associated Press reported.

But Anastasiades said that because of the constitutional referendum in Turkey scheduled for April 16, "it may not be the time" for Turkish and Turkish Cypriot officials to "make those necessary decisions" that would move the process forward on key issues of the peace process.

The Eastern Mediterranean island was divided into a Turkish Cypriot state in the north and a Greek Cypriot administration in the south after a Turkish military intervention following a Greek-inspired 1974 military coup.

The Turkish and Greek Cypriots have been negotiating for around two years to find a breakthrough to the nearly five-decade old dispute under the auspices of the United Nations.

However, talks were hampered due to Greek Cyprus' "Enosis" decision.

Guterres' Deputy Spokesman Farhan Haq has said Guterres expressed his hope that the talks would resume as soon as possible and that once they resume, both sides would expedite their deliberations, building on the progress they have achieved in the past 22 months, in order to move the process forward in a decisive matter towards a conclusion of a comprehensive settlement, Cyprus News Agency reported.