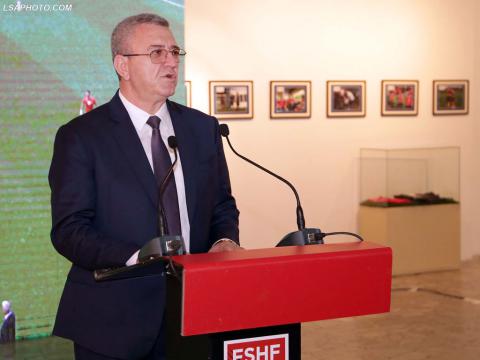 Armand Duka, the head of the Soccer Federation of Albania since 2002, easily won a fifth term on Wednesday, after winning 38 votes out of 66 in the Federation's Assembly.

Duka easily defeated Bashkim Fino, former Prime Minister and MP for the ruling Socialist Party, in a battle that raised concerns about political intervention in sport.

The campaign was rife with mud-throwing by both parties, including allegations of corruption and mismanagement.

In the last local elections in 2015, the left-wing coalition around the Socialist Party won most of the country's 61 municipalities.

However, some municipalities were won by the Socialist Movement of Integration, LSI, which since 2017 has gone into opposition. The presence of so many politicians in the Assembly of a sporting organisation raised concerns about relationships between sport and politics.

Trying to distance himself from any political connections, Fino promised to renounce his political positions if he won.

However, although not personally involved in politics, Duka is also well connected through his brother Agron Duka, a former Socialist Party minister before 2005 who switched sides and now leads a small party allied with the opposition Democratic Party.

Political connections didn't help Fino, however; he got just 24 votes.

He then dismissed the results as cooked and announced he will follow procedures to fight the results.

The Albanian Soccer Federation was founded in 1930. The national team achieved its highest...