Sergei Stanishev, PES: The Mission in the Coming Elections is to Save Europe 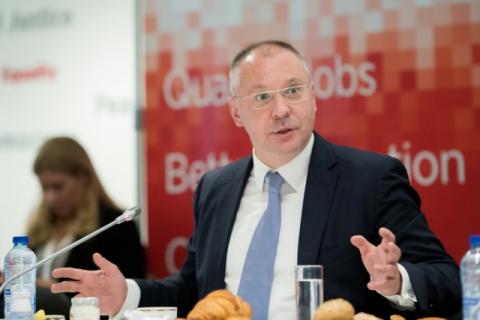 The mission in these elections is that Europe must be saved, said Sergei Stanishev, leader of the Party of European Socialists and MEP, during a discussion on Europe's future, Focus News Agency reports.

"I think there are two threats: a threat by the status quo, arrogant, saying that everything is fine, that we came out of the crisis, we have economic growth, unemployment is low, no change is needed. This is totally unacceptable to most people in the EU. The second threat is fierce extreme nationalism. Besides unfeasible, it is dangerous. It needs the image of an enemy who may be the refugees, ethnic minorities, and that always means that the enemy is our neighbours," Stanishev said, adding that living in peace is Europe's greatest asset. For a medium country like Bulgaria, being part of the community is the best defence and balance in respect of national interest, he said.

"Otherwise, we stand alone against all challenges, surrounded by big players which are always arrogant when communicating with the small ones. In this community, if one has the skills, one can defend one's interests and ideas, finding internal allies, relying on European values such as solidarity, mutual understanding, balance seeking," the PES leader said.