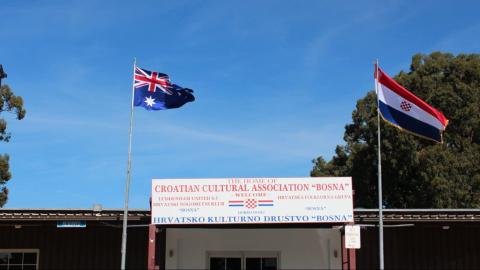 Similar clubs operate across Australia, gathering places for more than 43,000 Croatian-born Australians and more than 133,000 others who claim Croatian ancestry.

Tens of thousands of Croats migrated to Australia after World War Two and the collapse of the NDH, when Croatia became part of the socialist Yugoslav federation under Josip Broz Tito.

As the Croatia of today, independent since 1991 and a member of the European Union since 2013, wrestles with a growing trend of historical revisionism and the glorification of the NDH, a similar trend can be seen among Croats in Australia, but often even more extreme than in Croatia.

In the 1960s and 1970s, multiple Ustasa offshoots were active in Australia, and groups such as the Croatian Revolutionary Brotherhood were responsible for a number of attacks against the Yugoslav migrant community.

Homes, businesses and churches were vandalised and Yugoslav consulates in Melbourne and Sydney were bombed. It is believed the Ustasa also recruited fighters in Australia to infiltrate Yugoslavia and agitate against the communist regime.

Dr Kristy Campion, a lecturer in Terrorism Studies at Australia's Charles Sturt University who has researched the Ustasa's activities in Australia in the 1960s and 1970s, said the attacks were originally treated as "a Yugoslav problem", but drew greater attention the more violent and indiscriminate they became.

By the end of the 1970s, the Australian authorities had cracked down and the group was far less active, yet the Ustasa movement is still celebrated at Croatian social clubs and community centres across the country.

In Melbourne, a statue of...