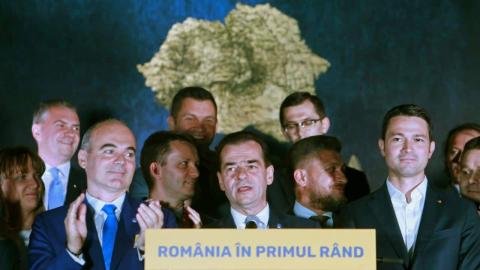 National Liberal Party, PNL leader Ludovic Orban has ten days to secure the support of parliament after President Klaus Iohannis asked him on Tuesday to form a new government.

Orban's nomination comes after the Social Democratic Party, PSD government was ousted last Thursday in a no-confidence vote tabled by the opposition.

Orban, 56, is a former Minister of Transport and has led the main centre-right opposition PNL party since 2017.

The government he chooses will need the vote of at least 233 of the 264 lawmakers in parliament to be able to assume office.

"I trust all the partners that have been with us to achieve the major objective of putting an end to the PSD government," Orban said at the nomination ceremony on Tuesday.

He said his priorities will be correcting the "macroeconomic unbalances" in Romania and prioritising investments in transport and infrastructure.

He also made promises to ensure "judicial independence" and to "bring back competence and professionalism" to the administration.

Orban's PNL has only 95 MPs in the two houses of the Romanian bicameral parliament.

It will require the support of the varied array of opposition parties that toppled the Social Democratic government last week in parliament to secure the necessary majority.

The third-largest party in parliament, the centre-right and pro-EU Union Save Romania, USR, has expressed its preference for early elections "as soon as possible".

In a statement on Tuesday, the party, which has 40 MPs in the current legislature, made clear that won't take part in any government before a new parliament is elected.

"USR parliamentarians might analyse the possibility of voting for the investiture of a transition cabinet," the statement said...

European Commission: EUR 9.218 Billions Grants for Bulgaria, Italy and Spain on Top of the Table
MAE on International Day of "Blue Helmets": Women on mission, essential factor of peace