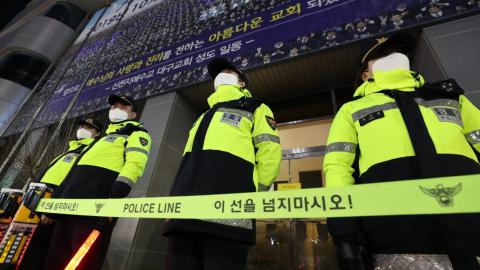 The 88-year-old leader of the church, Lee Man-hee, who claims he is the second coming of Jesus Christ, is also chairman of an organisation called Heavenly Culture, World Peace, Restoration of Light, HWPL, and which has been active in North Macedonia, Albania and Kosovo.

HWPL says it works to promote peace in the Balkans in light of the region's troubled past. Since 2016, it has organised a number of conferences and meetings with civil society organisations in the region.

The COVID-19 pandemic has already caused the organisation problems: in January, its members, apparently mistaken as Chinese, were verbally abused while working in North Macedonia in an incident widely reported in local media. The authorities in North Macedonia apologised and launched an investigation.

News broadcast of Lee Man-hee, the founder and leader of the Shincheonji Church of Jesus, at Seoul station in Seoul, South Korea, 2020. Photo: EPA-EFE/JEON HEON-KYUN

Branded a cult, the Shincheonji church has faced a tirade of abuse in South Korea since cases of COVID-19 surged. Critics say the group's practices, which involve packing worshippers tightly together during services and a ban on health masks, have contributed to the spread of the virus.

South Korean President Moon Jae-in said that, after the Shincheonji infections, the outbreak in South Korea had entered a "totally different phase."

Shincheonji, founded in 1984, now faces several lawsuits and even a possible murder investigation. Most of its members in the country have also been tested for coronavirus and the church is facing calls to be dissolved.

"I seek the forgiveness of the people," he told...