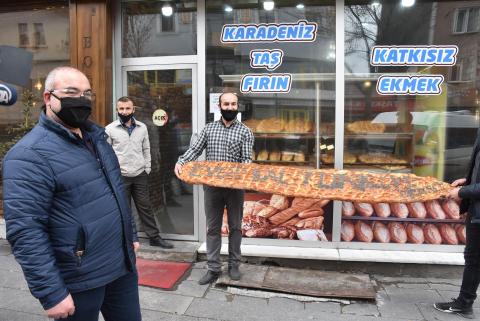 A baker in the eastern province of Kars sold a 2.20-meter pita, with "Stay at Home Turkey" written on top of it using poppy and black seed prepared for the holy month of Ramadan.

Bakery owner Mustafa Kaya, who made the Ramadan pita with a dough weighing about 14 kilograms, said that he prepared such a thing in order to raise awareness to coronavirus measures.

The pita left on the counter after cooking in the oven was put up for auction due to the large number of people who wanted to buy it.

The Ramadan pita put up for auction from 36 Turkish Liras ($5), which is the traffic license plate code of Kars province, was sold for 150 liras ($22).

Tayfun Boy, the buyer, said he bought the pita to distribute among his neighbors.

Ramadan pita, a painstakingly prepared circular flatbread with a baklava-like pattern as a crust, is an indispensable part of for iftars, which Muslims end their daily fast at sunset.

The dough for the pita, cooked especially during Ramadan is enriched with sugar, oil, milk, and eggs and is put through multiple rises before being baked in a wood-fired oven.