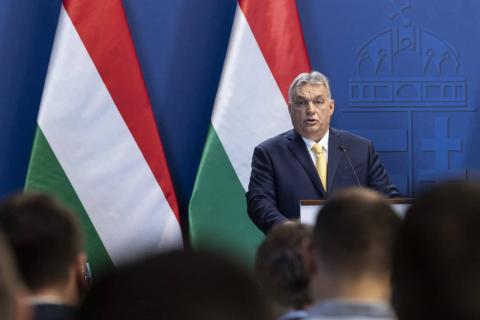 Croatian President Zoran Milanovic responded artfully on Thursday to a provocative Facebook post by the Hungarian leader that depicted a map of Greater Hungary - i.e. with the much bigger borders of the old Hungarian kingdom before the end of World War I, which included much of modern Croatia.

After Prime Minister Viktor Orban posted the Facebook message, wishing good luck to students taking their final exams, and with a globe showing the borders of Greater Hungary, Milanovic on Facebook on Thursday urged Croatian school graduates not to publish any old maps that make Croatia look any bigger than it is now.

"In our closets and archives there are numerous historical maps and maps that show our homeland much bigger than it is today … Don't share them and put them on your profiles. They are not contemporary or achievable today, and, more importantly, [they] endlessly irritate our neighbours," Milanovic advised.

Orban's map of Great Hungary included large parts of modern Serbia, Romania and Slovakia, as well as the northern half of Croatia - all lost under the Treaty of Trianon of 1919 following the collapse of the joint Austro-Hungarian state.

This is not the first time that Orban has posted a photo of the map of "historic" Hungary on social media, but there have been no strong reactions from Croatia in the past.

In December last year, after a few days of silence, Croatian Prime Minister Andrej Plenkovic said his government would "hold talks with the Hungarian side" about such matters, adding that the "current Croatian borders are as they are", and that Croatia must cooperate with its neighbours.

"The Croatian state leadership and Croatian nationalists know … that what Orban is doing makes sense only for internal [Hungarian] use,...