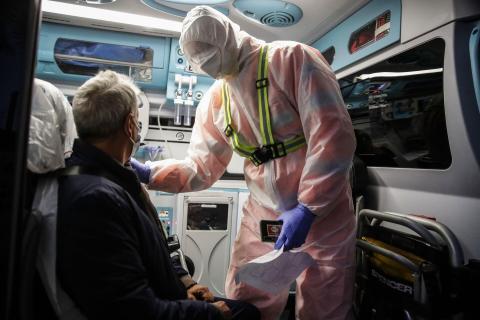 Germany announced on Nov. 25 that it will push for Europe to ban ski holidays in a bid to curb coronavirus infections, while cases of COVID-19 reached a new peak of more than 60 million globally.

The prospect of Christmas behind closed doors rather than on the slopes stretched before Europeans as Americans faced their own gloom, recording the highest daily death toll from the virus in six months on the eve of a subdued Thanksgiving holiday.

U.S. President-elect Joe Biden cited accelerating plans to deliver a vaccine as he appealed for his "weary" countrymen to dig deep, with COVID-19 surging around the country.

"There is real hope, tangible hope. So hang on. Don't let yourself surrender to the fatigue," Biden said in a televised Thanksgiving address.

"You will get your lives back. Life is going to return to normal. That will happen. This will not last forever."
Biden spoke as a tally of official sources compiled by AFP showed that more than 60 million infections leading to 1.4 million deaths have been recorded around the world since the new coronavirus emerged in China late last year.

The number of infections - roughly equivalent to the population of Italy - likely only reflects a fraction of the actual total, as many countries lack testing capacity.

Rising cases have seen countries around the world impose new restrictions in recent weeks, though some - such as France and the United Kingdom - have begun cautiously opening back up again.

Germany, however, announced Wednesday that it will extend its virus curbs until 2021 and plans to seek a deal with European partners to close ski slopes until January 10.

The statement from Chancellor Angela Merkel dovetailed with French plans announced one day earlier to...