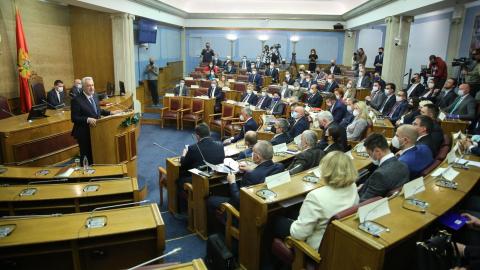 On Wednesday, leaders of the Front, the largest coalition in the ruling majority, warned the government that if it did not adopt the law and dismiss the special state prosecutor, it will not vote for the state budget or other law proposals.

"We have made a decision that the Democratic Front will not participate in any statements in parliament until the prosecution law is put on the agenda again, and in unchanged form, as we agreed. This has caused a crisis in the parliamentary majority," one of the DF leaders, Andrija Mandic, told a press conference.

The DF issued its warning after the government and the other ruling partners put adoption of changes to the laws on the State Prosecution and Prosecution for Organised Crime and Corruption on hold.

On February 3, the ruling majority proposed a law that would have opened the way to the dismissal of the Special Prosecutor's Office, headed by Milovoje Katnic - a contentious figure for his links to the former DPS government and his key role in the trial of a group of peolple accused of plotting a coup in 2016.

But on February 16, the new Prime Minister, Zdravko Krivokapic, said the law proposals needed to be withdrawn and European Union experts consulted first.

His request came after the EU ambassador, Oriana Christina Popa, warned that the law proposals could endanger judicial reforms and added that...