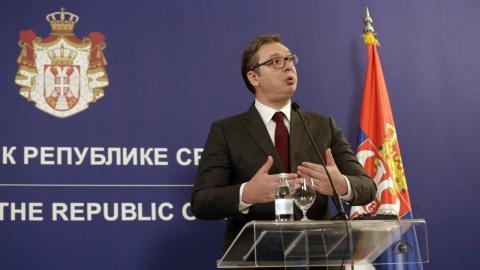 The group arrested on February 4 is suspected of monstrous assassinations, racketeering and drug dealing.

Its leaders, Belivuk and Marko Miljkovic, were also leaders of a group of Partizan football club fans. A sniper and other weapons were found on the premises of those so-called "fans" used at the Partizan stadium.

The informed part of the Serbian public was surprised by the arrests, as Belivuk and Miljkovic hitherto seemed to have the support of parts of the regime.

There is evidence for this. Vladimir Vuletic, law professor and vice-president of FC Partizan, claims that Novak Nedic, Secretary General of the Government, was behind the fan group that he said "took over" the Partizan stands. Nedic never denied this.

There are also videos and photographs showing that members of the "fan" group, once known as the "Janissaries" and now called the "Principles", were often hired as security at rallies where Vucic appeared.

An opposition activist, Marinika Tepic, who specializes in detecting the regime's wrongdoing, claims - and has the photos to prove it - that members of the group were part of the President's personal security detail during the opening of the sports stadium in Novi Pazar, southwest Serbia, in 2017.

At Vucic's presidential inauguration in June that year, members of Belivuk's group brutally attacked a journalist from the independent newspaper Danas. There is evidence that some of the "Principles" also took part in breaking up street protests against Vucic in the summer of 2020 in Belgrade.

Tabloids that do not hide their support for the regime have these days published claims that Belivuk had the support of former State Secretary in the Interior Ministry, MUP, Dijana Hrkalovic. All this is more...