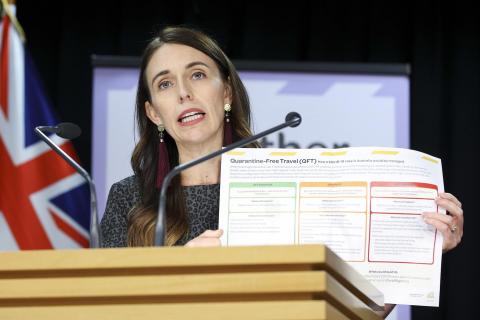 "I can confirm that quarantine-free travel will begin in just under two weeks, at 11:59 p.m. on April 18," Ardern announced after the date was confirmed by her cabinet.

The travel bubble comes more than a year after New Zealand closed its doors in the face of the coronavirus pandemic and six months after Australia allowed Kiwis to fly into selected states without the need to quarantine.

"I cannot see or point to any countries in the world that are maintaining a strategy of keeping their countries COVID-free whilst opening up international travel between each other," she said.

"That means in a way we are world leading."

"I very much appreciate the arrangement the New Zealand government has come to today," Australia Prime Minister Scott Morrison told a press conference.

"We welcome them back as indeed Kiwis will be welcoming Aussies."

Last week, the tiny Pacific island nation of Palau, one of the few countries never to have had a COVID-19 case, opened a travel bubble with virus-free Taiwan, which President Surangel Whipps described as a "ray of light" showing the world was slowly emerging from the pandemic.

However, just hours before Ardern's announcement, British Prime Minister Boris Johnson said it would be at least another month before he could allow holidays abroad.