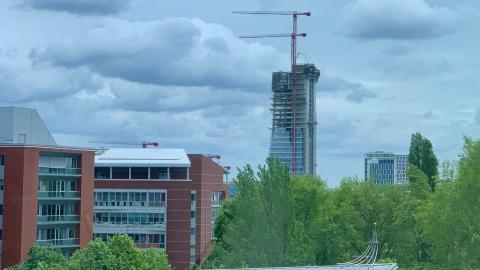 Ero believes the ruling Fidesz party has been the driving force behind this vainglorious project on the grounds that Prime Minister Viktor Orban needs an iconic building to symbolise Hungary's position as a regional power.

Not that Budapest's first skyscraper will compete with New York - or even Warsaw for that matter, whose Warsaw Tower at 320 metres is currently the highest building in the EU. Budapest's skyscraper, part of the MOL Campus, will have altogether more modest dimensions: 120 metres or 28 floors, comprising 86,000 square metres of office space and a spectacular viewing terrace on the top, which will accessible to the public.

MOL Campus is scheduled for completion in 2022, but even at the halfway point the tower can be seen from almost anywhere in the city. Its omnipresence reflects the company behind it: the tower is built by MOL Group, Hungary's regional oil and gas champion, present in 30 countries and employing over 26,000 people. MOL is a strong player in Central Europe, owning almost half of Croatia's INA and boasting a wide network of filling stations across the region.

MOL chief executive Zsolt Hernadi - who is involved in a decade-long legal battle in the Croatian courts over accusations of bribing former Croatian prime minister Ivo Sanader to gain management control over INA - and Prime Minister Orban are said to be on friendly terms and are sometimes seen enjoying each other's company at soccer matches. Rumour has it that they play cards together; neither is short of ambition.

Asked by BIRN about its new headquarters, MOL said it believed "modern architecture and iconic buildings have enriched many European...