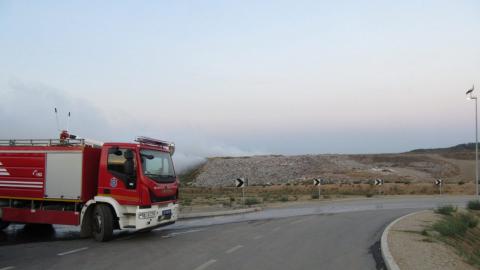 NGOs, political parties and residents of Belgrade have called on the local authorities to ascertain responsibility for the fire that broke out at the Vinca landfill, near the Serbian capital, on Sunday, and covered almost the whole of the city and surrounding areas in smoke for more than 24 hours.

Danijela Nestorovic, a lawyer for NGOs that are part of a group called Ekoloski Ustanak (Environmental Uprising), on Monday asked the City Institute for Public Health to explain what air pollution measures it had taken, why citizens were being left without information and whether their health was being endangered.

"It is very important for the City of Belgrade to state what it will do next in terms of relocating this landfill, what it will do if this fire continues, because the temperatures are still high - and what they expect to happen," Nestorovic told a press conference.

"If the city institutions and the City of Belgrade do not declare themselves, the organisations gathered around Environmental Uprising will be forced to file criminal charges against those responsible," she added.

Thick white smoke with a strong smell started to spread over Belgrade on Sunday morning and could later be seen over almost all of the city.

Mayor Zoran Radojicic on Sunday said the fire broke out on Saturday evening and spread over five hectares.

He added that "there is no danger that the fire will spread" and "although citizens will be able to see the smoke from this fire in the next few days… there is no place for fear and panic".

"The recommendations of the experts of the Institute of Public Health are that if citizens smell the smoke, they should close their windows and not go outside unnecessarily," Radojicic continued.