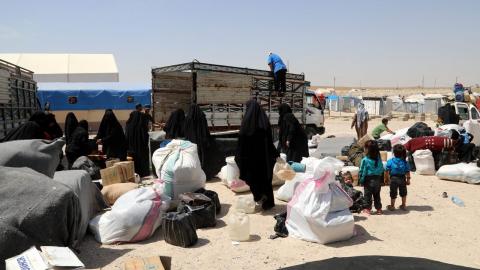 Despite the potential security threat posed by their return, which all three countries say they are taking seriously, experts warn that these people cannot be reintegrated only by the political centre; the local communities where they live must play an even greater role.

Children most need trauma counselling, and parents need both psychological counselling and monitoring, as well as help to find jobs and a new purpose once they come home.

The three countries say they are already conducting inquiries and carrying out security checks on the returnees who have been placed in specialised centres for now.

Some, like the four wanted men in North Macedonia, have been placed in detention as investigators work on collecting evidence for possible prosecution, North Macedonia's Interior Ministry said.

The women returnees are also being checked for possible involvement in incriminating or terrorist activities.

The head of Albania's Special Prosecution Against Corruption and Organised Crime, SPAK, Arben Kraja, told BIRN that the women returned to Albania will be interrogated as part of an ongoing investigation.

"We have an open investigation into the fighters who went to Syria and, as part of that investigation, they [returnee women] will be questioned," he said.

Kosovo's Interior Minister, Xhelal Svecla, was equally adamant that returnees won't get a free pass. "Those who have committed crimes, here or abroad, will be prosecuted," he said.

Otherwise, the Kosovo government has said that it "is helping them to return to...