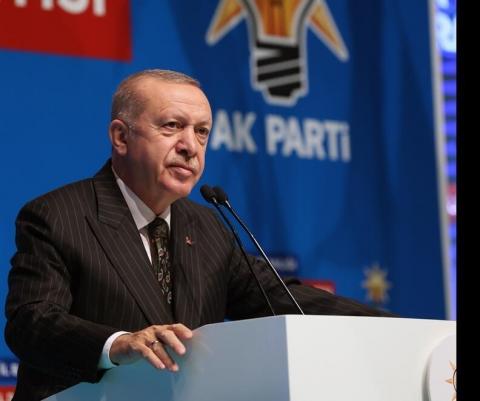 President Recep Tayyip Erdoğan on Sept. 17 reiterated his party's intention to win upcoming elections in 2023 as the People's Alliance with the Nationalist Movement Party (MHP).

"As the AK Party [Justice and Development Party] and the People's Alliance, we want to continue our journey of service to the nation by restoring confidence in 2023," he said, addressing his party's meeting in the southern province of Mersin.

Erdoğan urged party members to make further efforts through the election campaign and tell the voters about the future plans of the AKP.

"For this, we have to start working in a planned, programmed, active way and make the best use of the next time. We must accurately tell our people about the reforms that the AK Party has implemented in the economy, democracy, law, defense industry, security and justice. We must tell not only our past achievements but also our 2053 and 2071 visions to our nation," the president said.

Emphasizing that they are resolutely continuing their struggle to serve the country even though they encounter difficulties, Erdoğan said, "While the leaders of the opposition are wandering between the rooms of their houses, we are traveling all over Turkey from east to west, from north to south."

While the opposition is "killing time in the 'you-me' fight," the AKP is working day and night to help the country achieve its goals, Erdoğan said.