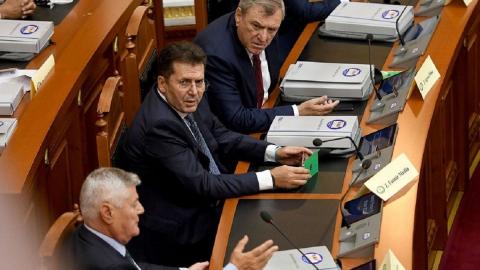 The Special Court of Appeals Against Corruption and Organised Crime ruled on Friday that the case against Fatmir Mediu, who was defence minister in 2008 when an ammunition dump explosion killed 26 people, should be reopened.

The blast happened while ammunition from the period of Communist rule in Albania was being dismantled.

It was later learned that the work was being done by a private company without the necessary safeguards - one of many corruption scandals that hit the centre-right government of the time.

After the blast, Mediu resigned and his coalition's MPs agreed to vote to have his parliamentary immunity lifted.

However, he was re-elected as an MP in 2009 and after that, the High Court dismissed the case, claiming his immunity from prosecution had been renewed and parliament had to vote on removing it again.

Prosecutors didn't press the matter further and the case went no further.

Ardian Visha, defence lawyer for Mediu, who is now chairman of the opposition Republican Party, said in a statement that Friday's decision was unconstitutional.

"It is the first time that a lower court has decided to override the decision of the High Court," Vishaj said.

Albania reformed the practice of parliamentary immunity in 2012, allowing MPs to be prosecuted without parliament's prior consent. However, prosecutors did not ask again to prosecute Mediu.

In May this year, Zamira Durda, whose seven-year-old son was killed in the blast, refiled a request to the Special Prosecution to have Mediu's case sent to trial.

"It is good news for everybody," Durda told News 24 TV in Tirana following the court's decision.