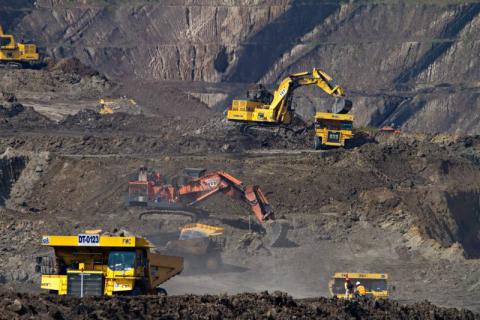 Trbovlje – The restructuring of what used to be Slovenia’s most mining-heavy region is expected to top the agenda as the government tours Zasavje in central Slovenia on Tuesday. The region is one of the two that can expect funds from the EU’s Just Transition Fund.

With a population of just over 57,000 living on 485 square kilometres, Zasavje is the second smallest of Slovenia’s 12 statistical regions and one that faces many challenges originating in its coal mining past.

Talking with the STA, Jani Medvešek, the head of the region’s development agency, has noted that the process of mine closures in the region has not been matched with a comprehensive socio-economic restructuring based on principles of just transition.

Moreover, the remediation process following the closure of the Trbovlje-Hrastnik mine has not been completed.

Medved also noted inadequate transport links in what is a hilly region, and insufficient business initiative among the locals who used to rely on solid and reliable earnings as miners while only a few major employers remain in the region.

Zasavje companies generated EUR 39 million in net profit last year, down 25% from the year before as the number of people in employment contracted by 3% to 7,303 mainly due to the pandemic. However, value added rose by 4% to EUR 42,821 gross per an employee.

Medved as well as the head of the regional chamber of commerce Tjaša Polc say the region will have to refocus on industries that are based on clean and renewable energy, and activities such as tourism, which has only just begun to develop in Zasavje.

But with a transition to green, digital and sustainable circular economy, the region will also face the challenge of finding the right staff, where businesses expect the state to help by creating the conditions for effective transition of young people from the education system to the labour market and reducing barriers to attracting foreign workers and talent.

These and other issues will be discussed in a series of meetings and visits with local institutions and businesses as the government visits the region, which as usual will wrap up with a public debate of regional development in Trbovlje.

Prime Minister Janez Janša is scheduled to meet the mayors of Litija, Zagorje and Trbovlje, and visit several companies, including the high-tech company DEWEsoft and the business accelerator Katapult in Trbovlje.