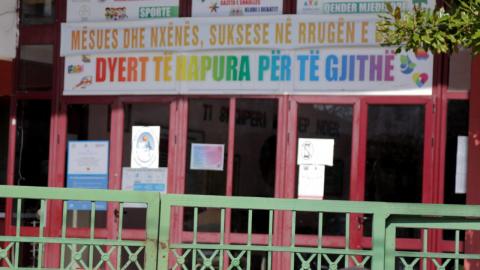 Albania and Kosovo are planning to produce a reading and spelling book that will be used by entry-level pupils in both countries from next year to coincide with the 110th anniversary of Albania's declaration of independence.

"Next year, on the occasion of the 110th anniversary of the declaration of independence we will gift first-grade students in Albania as well as in Kosovo with a new, mutual beginner's book, unified for all pupils," Evis Kushi, Albania's Minister of Education and Sport, said on November 28, Albania's independence day.

"The beginner's book taught all of us not only to read and write, but also made us more aware of the value of the Albanian language, the love for our country, people and culture," Kushi added.

Albania and Kosovo initially decided to produce the joint textbook in 2012, and Nevrus Kaptelli, head of Albania's Independent Education Union, told BIRN that it "is definitely overdue".

"Today our states should have had all their textbooks and [educational] programmes in common," Kaptelli said.

But some educational experts raised questions about whether it will improve the quality of education.

Rigels Xhemollari, an education and youth expert from the Albania-based Qendresa Qytetare (Citizen's Resistance) organisation, told BIRN that the initiative is "a patriotic-pathetic card aiming to cover up the failures of the government in education… [and] hundreds of agreements on education between the two governments left on paper… [as well as] the failure with Albanian textbooks that are filled with grammatical and ethical mistakes".

Mirlind Behluli, a researcher at the Kosovo-based EdGuard Institute told BIRN "Albania and Kosovo should create sustainable mechanisms for the implementation of the...