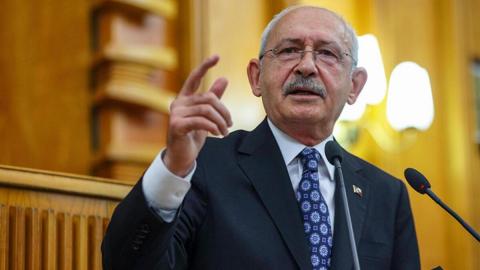 A significant objective of the main opposition Republican People's Party (CHP) is to repair the damaged sense of unity within the society by reconciling people from all walks of life, the party's leader has said, underlining the need for augmenting love and good feelings among citizens.

"We are a country that has suffered big pains. We don't deserve this. We all want to live in peace because our unity depends on this. Laughing together, crying together and growing with love. This must be our fundamental goal," Kemal Kılıçdaroğlu said after a visit to the Hrant Dink Foundation on April 17 in Istanbul.

Kılıçdaroğlu met with Rakel Dink, the wife of the Turkish journalist of Armenian descent, Hrant Dink, who was assassinated in front of his newspaper called Agos in 2007. He was shot dead by an ultranationalist hitman who is now serving a life sentence in prison.

"I came here to explain once again that we will reconcile with the victims of the crimes committed by some dark criminal groups with which we will fight against during our government," Kılıçdroğlu said.

The hitman of Dink's assassination was caught, but those who motivated him for the killing are still in the dark, and many of these criminal groups have infiltrated into the state, Kılıçdaroğlu said, vowing to clear the state apparatus from these criminal networks through a determined struggle.