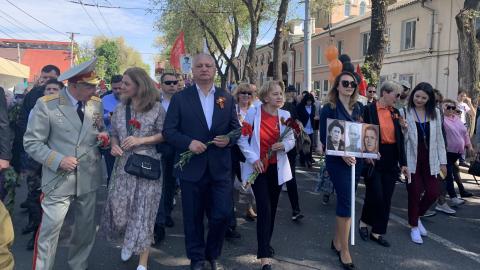 Several thousand people in Moldova's capital Chisinau took part in an "Immortal Regiment" march on Monday, organised by the pro-Russian Socialist Party, PSRM, many of them breaking a new law that bans the display of symbols glorifying the former Soviet communist regime.

Moldovan police warned citizens not to use forbidden symbols at the commemorative events, but many disobeyed the order.

A man wearing a Soviet uniform and a banned St George's fribbon on his chest stand in front of a riot police officer. Photo: BIRN/Madalin Necsutu

The Socialists summoned their supporters from all over the country for the day commemorating the Soviet victory over Nazi Germany. It brought supporters to Chisinau by bus where it Youth Guard, consisting mainly of teenagers, marched with Soviet and Moldovan flags.

The Young Guard dressed in black and orange clothes to mark the forbidden orange-black ribbon of "St George" subliminally.

The participants all met up in the Grand National Assembly Square, in the centre of Chisinau, after which they set off on foot to the Eternitate [Eternity] memorial.

Participants in the march wore red flags with Soviet hammers and sickles, photos of those killed in World War II, and chanted: "Pobeda!" ["Victory", in Russian].

At the head of the column were the former Moldovan presidents Igor Dodon and Vladimir Voronin and several leaders of the PSRM and the Communist Party, PCRM, with the black and orange ribbon of St George on their chests, again defying the law banning Soviet symbols.

Youth Guard of the Socialists Party dressed in black and orange, like the St George's ribbon. Photo: BIRN...