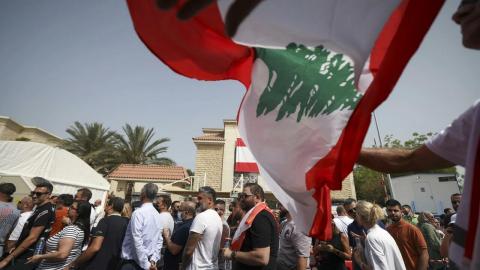 Lebanese expatriates in 48 countries including France and the United Arab Emirates voted Sunday ahead of the May 15 parliamentary elections, state media reported.

The critical election comes amid an unprecedented financial crisis that has spurred a mass population exodus, with opposition figures pinning their hopes for a change on the diaspora vote and experts saying the political status quo is expected to remain.

The vote is the first since the onset of the economic crisis in 2019 and the devastating Beirut port explosion a year later, with many accusing the political elite of rampant corruption and mismanagement.

"I voted for change," said Abed Saad, who cast a ballot in Dubai, where people queued for up to three hours.

"If we don't vote, others will win, and we don't want them to win," the 27-year-old said, referring to established parties.

More than 194,000 people in 48 countries are registered to vote on Sunday, according to the official National News Agency.

Turnout rates in Australia, where polls have closed, reached 55 percent, according to the foreign ministry.

In the United Arab Emirates, turnout by the afternoon was at more than 44 percent, while across Europe, it was at 20 percent with France accounting for the highest number of voters, the foreign ministry said.

In Paris, long lines were reported outside the embassy with hours left to vote.

"I have a great feeling of hope and satisfaction because I saw that there were a lot of young people and first-time voters," Lebanon's ambassador to Paris Rami Adwan told AFP.

Lebanese citizens living abroad were able to vote for the first time ever for their 128 members of parliament in 2018.

Voting on Sunday also got underway in the...