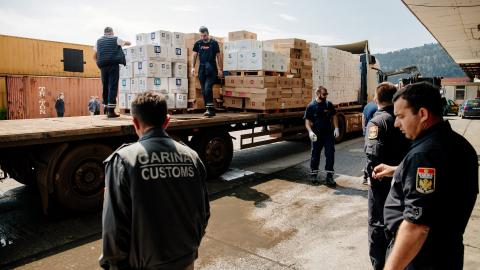 The Customs Office said it seized eight containers with 4,000 boxes of tobacco owned by a US company, Lenora International, registered in the US state of Delaware.

"Since May, the fight against cigarette smuggling has intensified, as this is the third major seizure. During a one-month period, Montenegrin authorities seized more cigarettes than any other European country," the Customs Office said in a press release.

"We will not stop intending to suppress cigarette smuggling through our state because the port of Bar should become the backbone of Montenegro's development, not a smuggling point," it added.

But while Interior Minister Filip Adzic praised the fight against smuggling, Lenora's international legal representative, lawyer Zoran Piperovic, claimed that the authorities had seized tobacco legally stored in the port and announced a lawsuit against Montenegro.

"Tobacco was stored in the port in accordance with legal procedures and was ready to leave Montenegro by ship. The Customs Office thinks it's legal to take cigarettes because the shipowner is late, so someone will have to spend a lot of money because of their mistake," Piperovic told the media.

Since the collapse of Yugoslavia in the 1990s, Bar has become known as a centre for cigarette smuggling from where imported tobacco is re-exported and cigarettes made in Montenegro are shipped.

According to official data, 21 of the total of 26 companies with storage in the port are stocking tobacco. Last July, the government announced the start of a legal process to prohibit the storage of tobacco products in Bar as part of measures to prevent tobacco and cigarette smuggling.