Government will not stop caring for its people in Kosovo 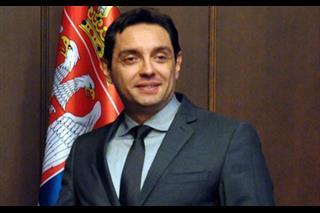 STARA PAZOVA - Serbia's Minister Without Portfolio in Charge of Kosovo Aleksandar Vulin visited on Thursday young players of the football clubs Gracanica and Mokra Gora from Zubin Potok who were at the sport centre of the Football Association of Serbia (FSS) in Stara Pazova.

"The children of Kosovo will always find an open door here and be able to learn something, but more important than what they learn about football is that Serbia cares and will contiue to care for them," he said.

He added that they would never be foreigners in Serbia and thanked the FSS for keeping that in mind.

He stated he would be happy to be able to take children from Serbia to Kosovo to play football.

Head of Serbia's junior teams Savo Milosevic said he was honoured the FSS could play host to children from Kosovo, adding that there had been discussions about cooperation and assistance.

He wishes Serbian teams could visit Kosovo and teams from Kosovo could come to Serbia more often.