Turkey's Abdullah Gul Not to Run for Second Presidential Term 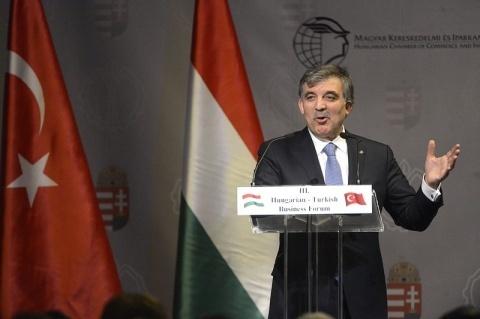 Turkish President Abdullah Gul has announced he will not stand to be re-elected for another seven years on August 10.

“I will not present my candidacy. I already told this to [Prime Minister Recep Tayyip] Erdoğan before the March 30 [local elections]. My office will end on August 28,” Hurriyet Daily News quoted him as saying.

Despite Gul's comments, it was not officially clear whether the President would run, and reports suggested he had been repeatedly pressured into not taking part in the vote.

His decision means Prime Minister Erdogan will be the ruling Party of Justice and Development (AKP)'s choice to place his bid for the presidency, as the head of state will be directly elected this year for the first time in Turkey.

Erdogan is expected to announce his ambitions for the office on July 1.

Some members of the AKP have repeatedly voiced their support for Gul to hold the office of Prime Minister if the incumbent wins the elections and vacates the office.

Gul's announcement, paving the way for Erdogan to enter the contest, comes weeks after major opposition parties in Parliament, formerly kemalist Republican People's Party (CHP) and far-right Nationalist Movement Party (MHP), raised Ekmeleddin Ihsanoglu, the ex-head of the Organization of Islamic Cooperation (OIC) as their joint candidate for the post.

The Kurdish Peace and Democracy Party (BDP) is yet due to nominate its own candidate.