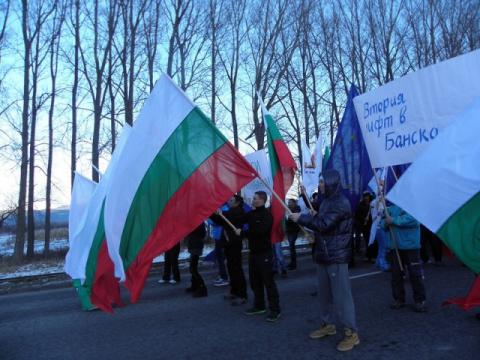 Protests on account of the suspended building of new cable cars in Bansko and the stopped expansion of the Pirin mountain ski zone will take place on Tuesday on the main road E79.

The time is set for 5:30 pm and the location will be the interconnection with the road to Simitli, as reported by the Bulgarian National Radio.

Local citizens and representatives of the tourist business in Bansko have already protested several times at the entrance of the resort. They have been largely supported by people from Razlog and other nearby villages.

The Mayor of Bansko Georgi Ikonomov met with Bulgarian PM Boiko Borisov on account of the suspended concession agreement on January 7 over Pirin National Park.

Meanwhile, the municipality of Bansko has not given up on its desire to become the new concessionaire of the Dobrinishte ski zone, located in an area close to Bansko.

Bulgarian environmental ministry firmly opposed the concession procedure, deeming it unlawful, while Sports Minister Krasen Kralev expressed the belief that the issue will be resolved in favor of the ski destination.

Kralev further stated that it is not reasonable for an entire mountain to be declared a protected area, adding that UNESCO representatives had not prohibited construction in Pirin at all.

An announcement was made on Tuesday that an extension until the end of February is provided so that the inter-departamental government commission can deliberate on the final decision regarding Yulen - the main private tourist operator in Bansko.