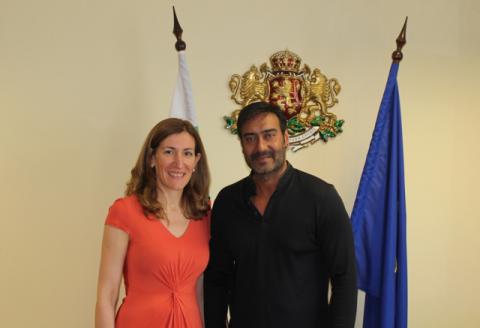 The star of Bollywood cinema Ajay Devgan will participate in a promotional video on Bulgaria advertising the country as a tourist destination, which will be broadcasted in India.

This was announced by Bulgarian Tourism Minister Nikolina Angelkova in the city of Varna on Friday after a meeting with local authorities and representatives of the tourism sector.

Devgan, who is on a visit to Bulgaria in order to select locations for his own self-directed production, agreed to participate actively in the new advertisement campaign of the Tourism Ministry.

The strategy of the ministry foresees the shooting of video spots with a personal touch featuring celebrities from markets targeted by Bulgaria, who will promote the country as a preferred tourist destination in their own countries.

The other two big Indian stars - Shah Rukh Khan and Kajol are also in Bulgaria for participation in movie productions.

Devgan is among the top ten richest Bollywood actors, while Shah Rukh Khan is the second richest in the world, the press service of the Tourism Ministry informs.

Publications in Indian websites have already emerged, announcing that the two cinema stars are in Bulgaria to shoot movies, which has increased the interest towards the country.

Angelkova highlighted that India is a market with a population of 1.2 billion people and Bulgaria had a real chance of expand its positions on it.

The number of Indian tourists visiting Bulgaria last year amounted to 8400, which represented an increase of nearly 60 % compared to 2013.

These figures demonstrated a perspective for development and a rising interest towards the country.