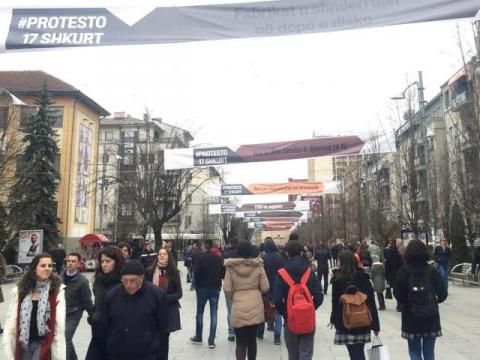 Opposition parties in Kosovo have called on people to take to the streets again on February 17, when the country will celebrate the eighth anniversary of the declaration of independence.

The rally marks a continuation of the opposition's campaign against an agreement with Serbia on the establishment of the Association of municipalities of Kosovo and a border demarcation agreement with Montenegro.

The three-party opposition bloc, Vetëvendosje, the Alliance for the Future of Kosovo, AAK and NISMA will also demand that the government to resign after the Constitutional Court ruled that parts of the agreement on the Association are unconstitutional.

While Isa Mustafa's government, supported by the international community, remains silent about this request, the head of the AAK, Ramush Haradinaj, warned implicity of violence on Friday, speaking in a forum with civil society representatives.

"Wednesday [February 17] will be the day of confrontation. The mumber of people in the protest will be bigger and they cannot ignore us anymore," Haradinaj said.

Prishtina lecturer in politics Arben Qirezi said the opposition had managed to build an "effective case" against the EU-brokered deals with Serbia and Montenegro signed last August.

"The international community has got Kosovo wrong by pressurizing the government to sign a deal which is not only unconstitutional, but undermines the functionality of Kosovo as a state," Qirezi told BIRN.

While the opposition wants the government to quit, Kosovo's two governing parties are in the process of preparing for a session when current deputy Prime Minister Hashim Thaçi will be voted President of Kosovo.

Naim Rashiti, from the Balkans Policy Research Group think tank, told BIRN that it was...