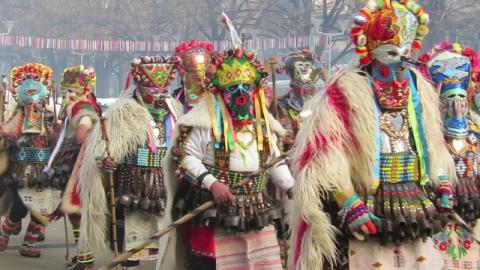 Masked revelers in colorful hand-made costumes thronged the streets of Pernik in Bulgaria on Sunday, warding off evil spirits and celebrating the beginning of spring with hopes for good health and a good harvest, reports Reuters.

The pulsating Surva carnival - the oldest festival of masquerade games in the Balkan country, this year features a record 7,500 Kukeri (mummers) from nine countries.

Visitors from China and the United States were among thousands braving chilly January weather for the annual festivities in the traditional mining town, located 15 miles southwest of capital Sofia.

"The atmosphere is brilliant, these costumes are so beautiful and the masks are just amazing," said Chinese student Wang Xao.

"I will definitely come back again next year because this festival is a magic, it fills me with energy and optimism."

Every winter, the mummers, dressed as animals or wearing elaborate horned masks, perform a traditional dance in a spectacular parade, producing an astonishing noise from the huge copper bells worn around their waists.

Most of the masks, which can be up to three feet (nearly 1 meter) in height, are double-faced, reflecting the coexistence of good and evil.

"It's generally thought that the custom is related to Thracian Dionysos and similar rituals can be found in different parts of the Balkan peninsula," said one of the oldest mummer Ivan Boyadzhiev, who took part in the parade for 14th consecutive time.