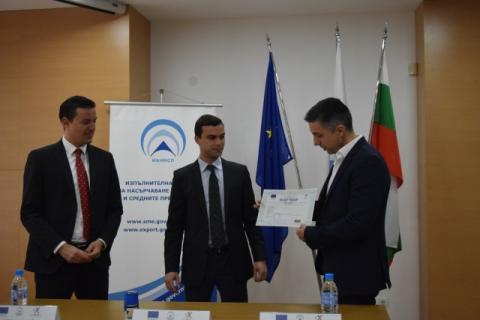 The company for biometric systems „Biodit" JSC will have the support of BGN 50 000 for its listing on the stock exgange. On a ceremony at Bulgarian Small and Medium-Sized Enterprises Promotion Agency, the Executive Director of the Agency Dr. Boyko Takov handed the voucher to Mr. Julian Sofroniev, Managing Director of „Biodit" JSC. The event was also attended by Mr. Angel Rabadjiyski, Executive Director of Karoll JSC, the company chosen as an investment intermediary.

„This is the first initiative I know that helps the business in this way", said Julian Sofroniev, the manager of the beneficiary company. „Now I am already thinking about the future." In a period of 9 months, Biodit JSC has to raise its capital to 500 000 BGN on the stock exchange. Then the voucher will be paid off to the company.

„The approval procedure of the candidates is extremely fast," said Dr. Boyko Takov, Executive Director of the Agency. „It all happened, may be, within two weeks for the first beneficiary." It is expected that at least 30 Bulgarian companies will benefit by the end of the voucher program, attracting over BGN 15 000 000 for the Bulgarian economy.

"Biodit" JSC has already submitted all the paperwork to the Financial Supervision Commission for exiting on the stock exchange and awaits approval of a prospectus. The company develops and implements biometrics identification products, used to control access to hotels, manufacturing plants, cars and ATMs. The company also operates in markets outside Bulgaria - Spain, Belgium, Sweden. It is not only the first beneficiary of the BSMEPA program, but also the first Bulgarian start-up, which is on the BSE.

Trainings for 7,000 Unemployed Professions in Bulgaria

Bulgaria's PM Boyko Borissov: The State of Emergency Expires on June 15 and All Measures Must be Lifted